Annual plastic consumption in Vietnam has increased from 3.8 kilograms per person in 1990 to more than 41 kilograms in 2018; a push that WWF Vietnam’s head of plastics policy and partnerships, Pham Manh Hoai, called “astounding”.

“Cities will continue to experience rapid urbanization and economic growth, and plastic production and consumption will also increase,” he said. “This is putting extreme pressure on local waste management systems and leading to worrying levels of plastic leakage across the country.”

The lack of proper waste management systems has allowed plastic to pollute Vietnam, where consumption of the material has increased more than tenfold in 30 years (Image: jack ross / China Dialogue)

Vietnam has approximately 3.9 million tons annual. Only a third is recycled. The rest is burned, buried in landfills or dumped directly into the environment, where it can seep into the country’s waterways and eventually into the global ocean.

Although grassroots efforts and social franchises are working to tackle plastic pollution in Vietnam, these initiatives are hampered by mountains of trash and the lack of an official waste sorting and recycling system. Vé chaiinformal waste workers, collect and sell the few recycled plastics in the country: clear plastic bottles and hard plastics commonly used for toiletries like shampoo.

But from January, Vietnam revisions Environmental Protection Act made municipalities responsible for recycling, which the informal sector generally did. It is unclear how the new regulations will be implemented and enforced, as the formal sector is currently ill-equipped to handle waste.

Jan Zellmann, co-founder of ReForm Plastic, which turns low-value plastics into panels that can be used in furniture, trash cans and other items in Vietnam and beyond, told China Dialogue that changes to Vietnam’s recycling mechanisms will be a slow transition with cities needing to build capacity.

“It’s an infrastructure issue, it’s a process issue, it’s a management capability issue – they don’t have it,” he said. “It will be a very gradual change and transition.” 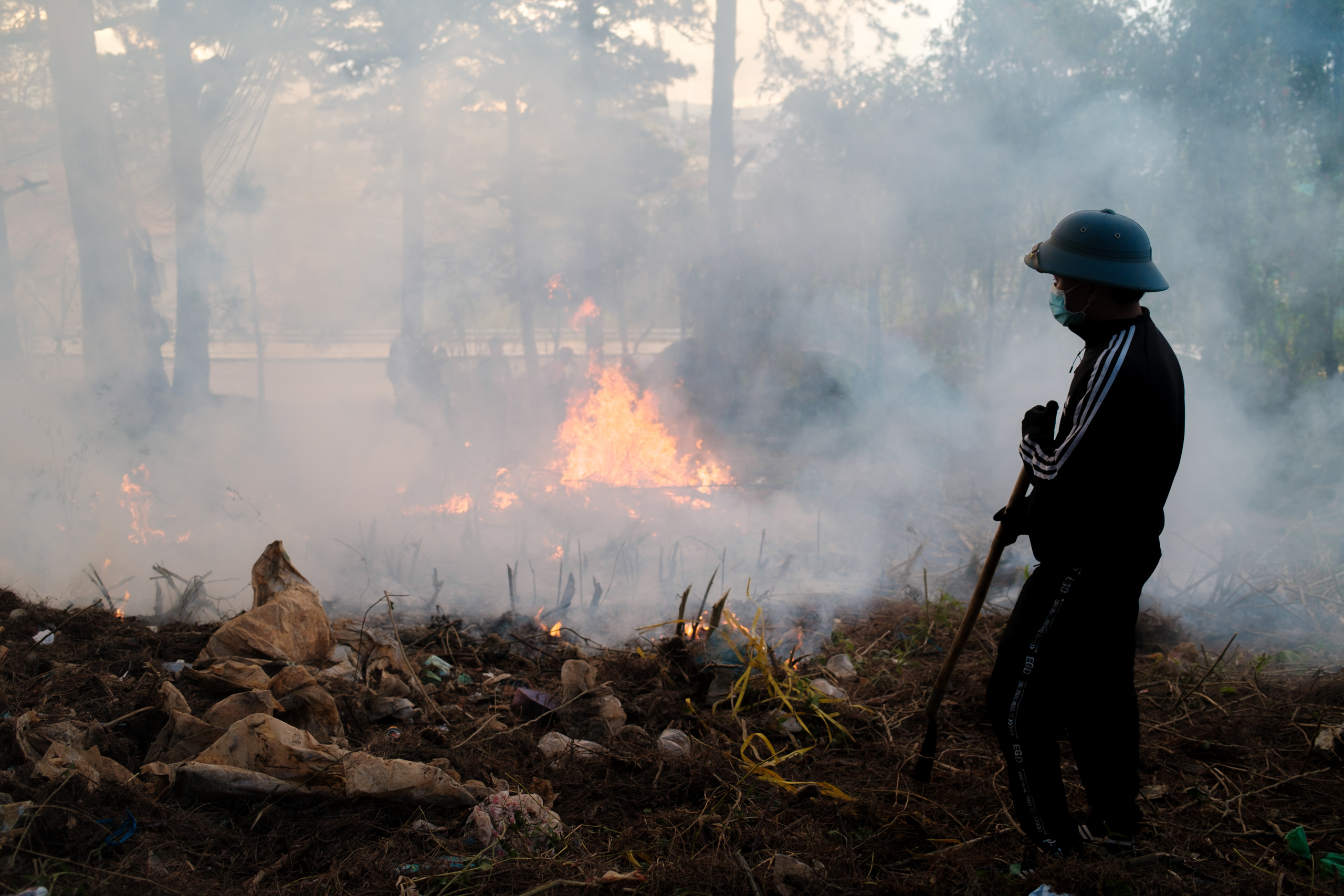 With few other ways to deal with their waste, residents of the city of Dalat in the central highlands resort to burning (Image: jack ross / China Dialogue)

According to research released in 2020, Vietnam is the 11and the biggest contributor to the mismanagement of plastic waste, i.e. plastic that ends up in the environment rather than being treated via incineration, safe landfill or recycling. In 2016, the country produced 570,000 metric tons of this waste.

More than one ton of plastic waste has been collected for the eco-brick school project all over Vietnam. Tan Meftah, founder of sustainability-focused organization Wholistik Permaculture, came up with the plastic pollution awareness and recycling project in Vietnam.

Meftah collaborated with Jimmy Thai of Build a School Foundation, a US-based NGO that has built nearly 100 schools, mostly in Vietnam.

The bricks were finally transported by truck to Tra Vinh, piled up, caged in chicken wire and covered with cement to fill the frame of the school. 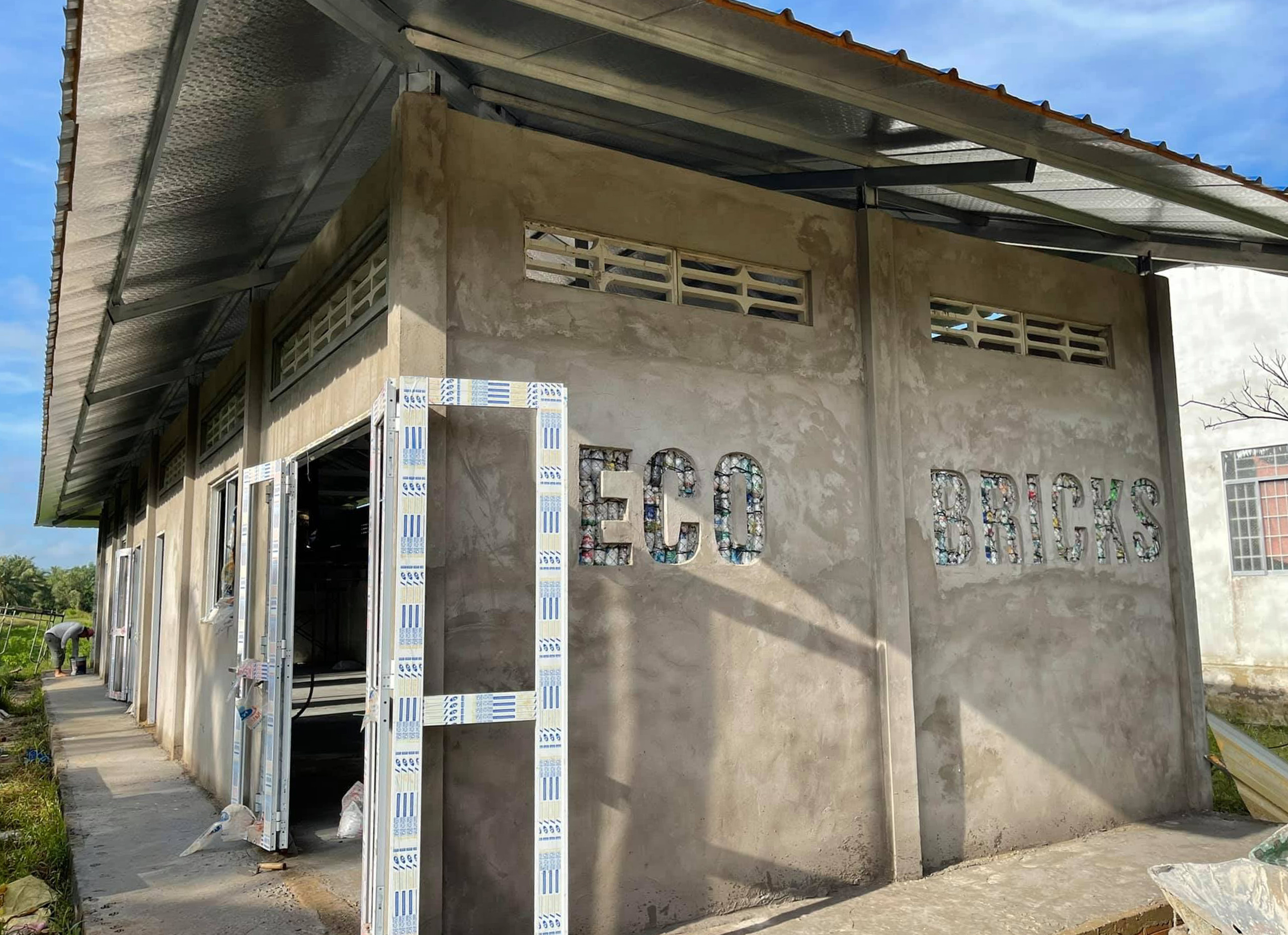 More than a ton of plastic waste was collected to make the ‘bricks’ used to build this vocational training school in Tra Vinh province (Image: Thay Minh Tri)

Thai told China Dialogue that a library for primary school students is being built using eco-bricks in Vietnam’s former capital, Hue. “We have already collected 3,000 bottles,” he said.

The second eco-brick effort is focused on collecting trash and building bricks near the library to reduce emissions from bringing in bricks from across the country. With plastic waste strewn across much of Vietnam, eco-bricks have the potential to be used more widely as a free building material for all kinds of structures, Meftah said.

As effective as the eco-bricks initiative is in educating about plastic pollution and reducing waste, the plastic collected is just “a drop in the bucket,” Thai said.

“Everything we’re doing here is really great for raising awareness, but I think it’s going to be extremely difficult to make a difference,” he said.

Kasia Weina and Jan Zellmann co-founded ReForm Plastic after realizing there was no way to recycle low-grade plastics in Vietnam.

“There was no solution available to actually manage this type of waste,” Weina told China Dialogue. “It was just either burned or thrown away at best.” 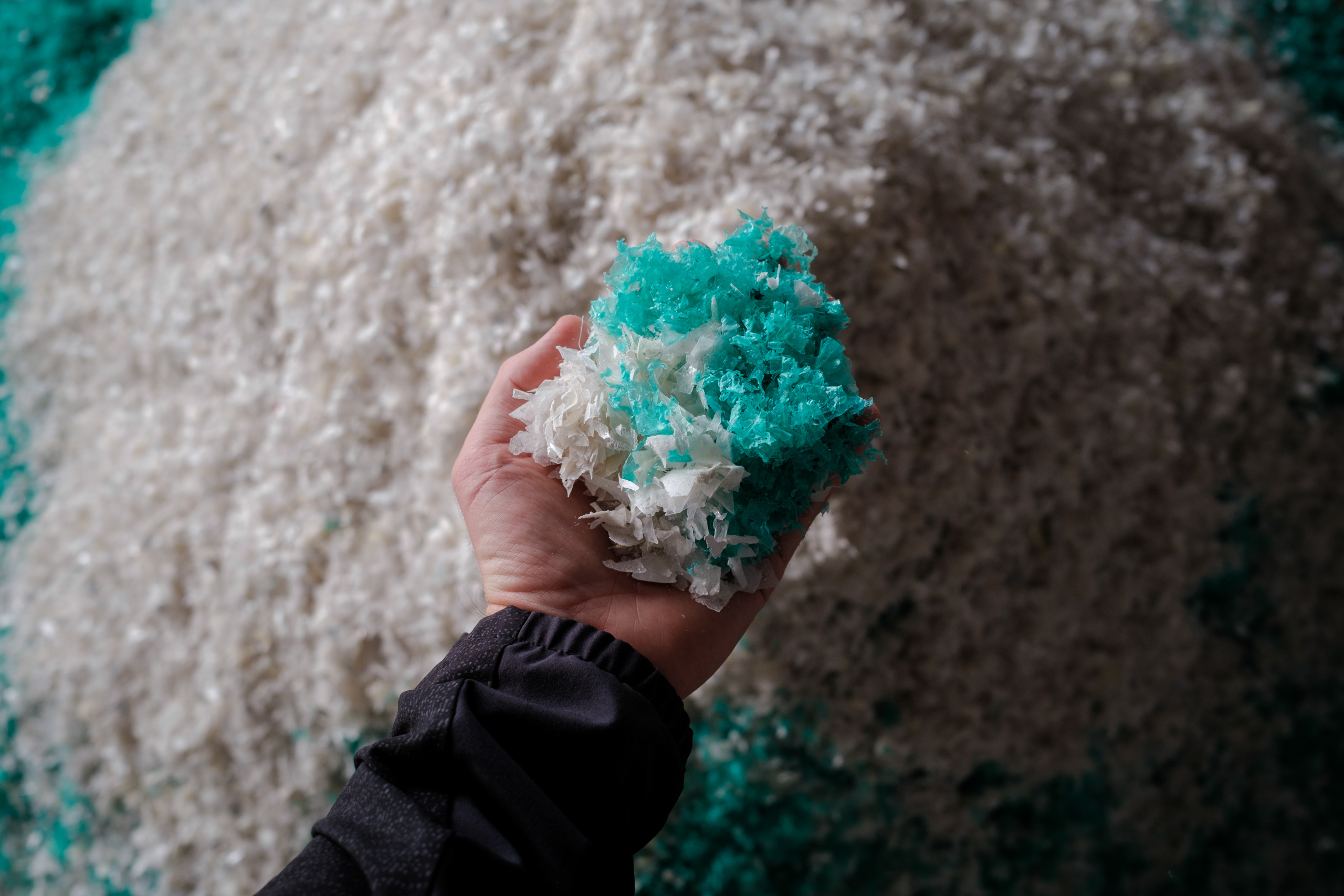 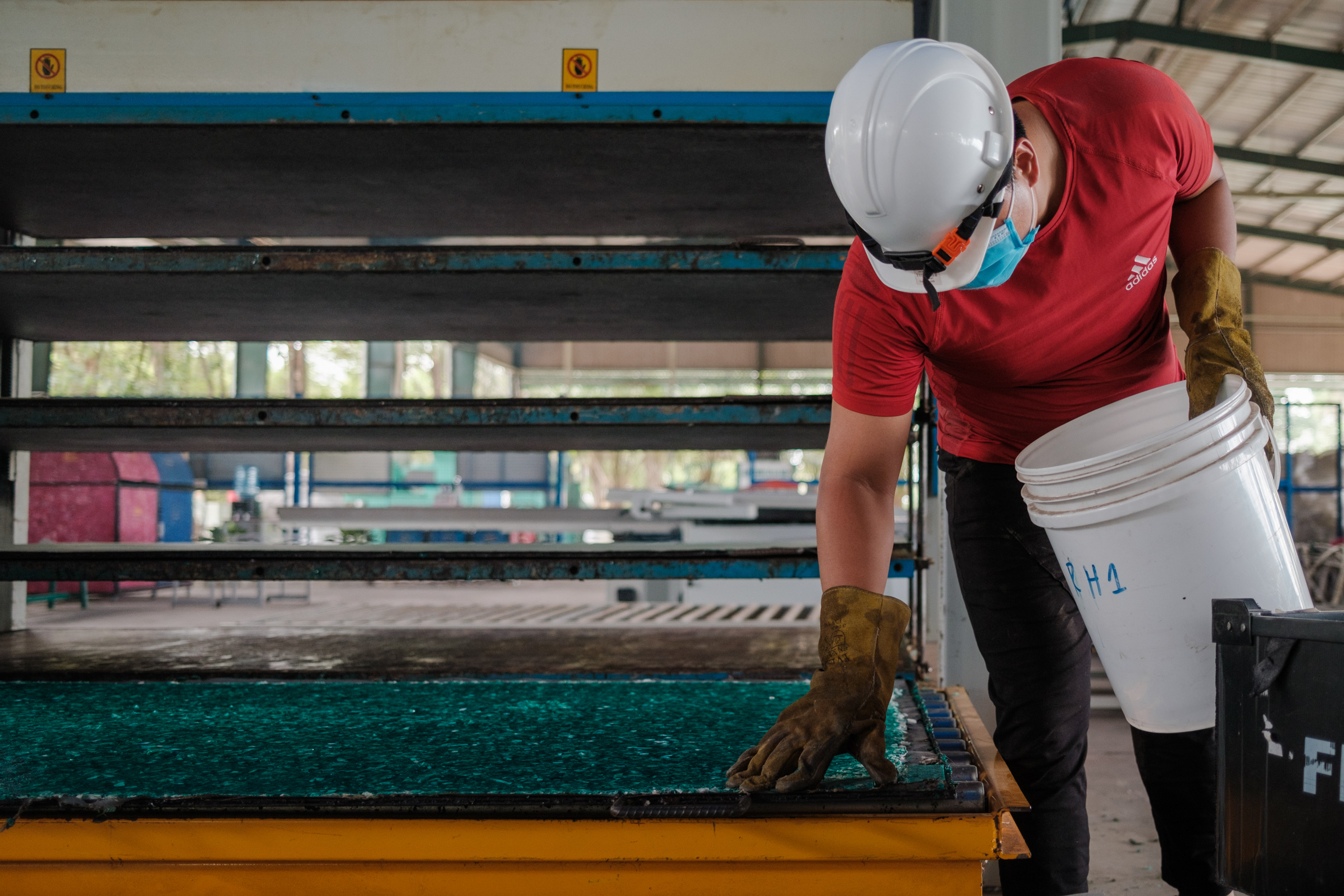 The shredded plastic is then pressed into planks which can be used to make furniture, bins and other items (Image: jack ross / China Dialogue)

The team set up its first factory to manufacture plastic planks from waste in 2020 in Hoi An, a UNESCO heritage site in central Vietnam. The Hoi An landfill has been full for two or three years, Weina said. It is mined and the waste is shipped about 47 kilometers south to a new landfill in the town of Tam Ky.

With an office based in nearby Danang, ReForm partners directly with the municipality to collect low-quality plastics and works with schools, hotels, offices, restaurants and bars to collect plastic waste.

At the Hoi An factory, this scrap is washed, dried, shredded into flakes and passed through a compression molding machine to form planks – a production method originally designed for wood or other composite materials. . 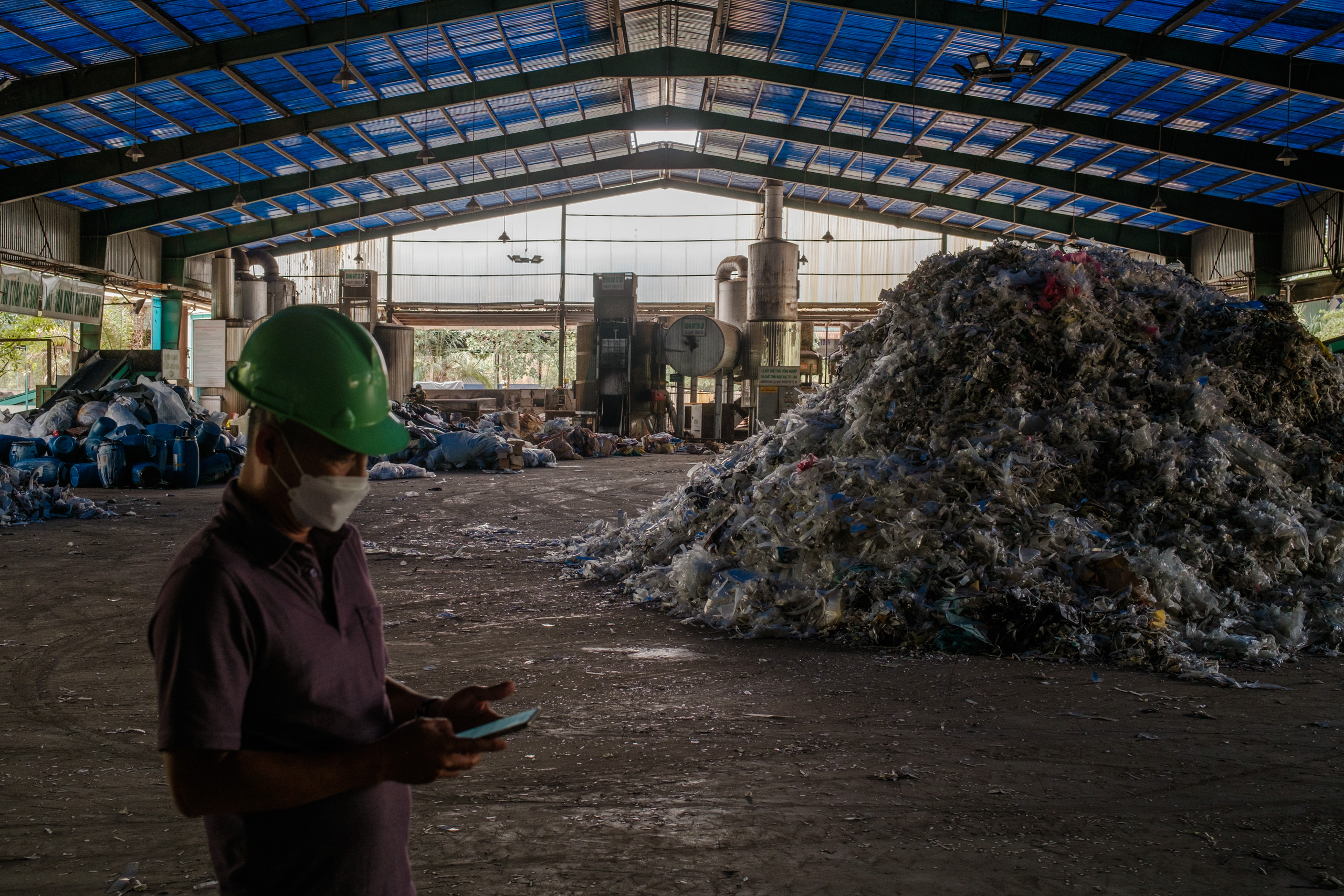 Late last year, ReForm expanded its operations by connecting to the Thanh Tung 2 (TT2) waste treatment site in Dong Nai province, about an hour and a half from Ho Chi Minh City. TT2 receives approximately 30 tonnes of post-industrial plastic waste per day.

The waste comes from industrial parks in the south. It is shredded, loaded into a hot press and cooled under pressure. It is then ready to be sold at competitive prices compared to its wood-based alternative.

Prior to the collaboration with ReForm, TT2 director Huynh Phuoc Loc said plastic waste collected at TT2 was either incinerated or flaked and then resold.

The new environmental protection law that came into force in January has turned cities into waste managers, responsible for managing and recycling it. 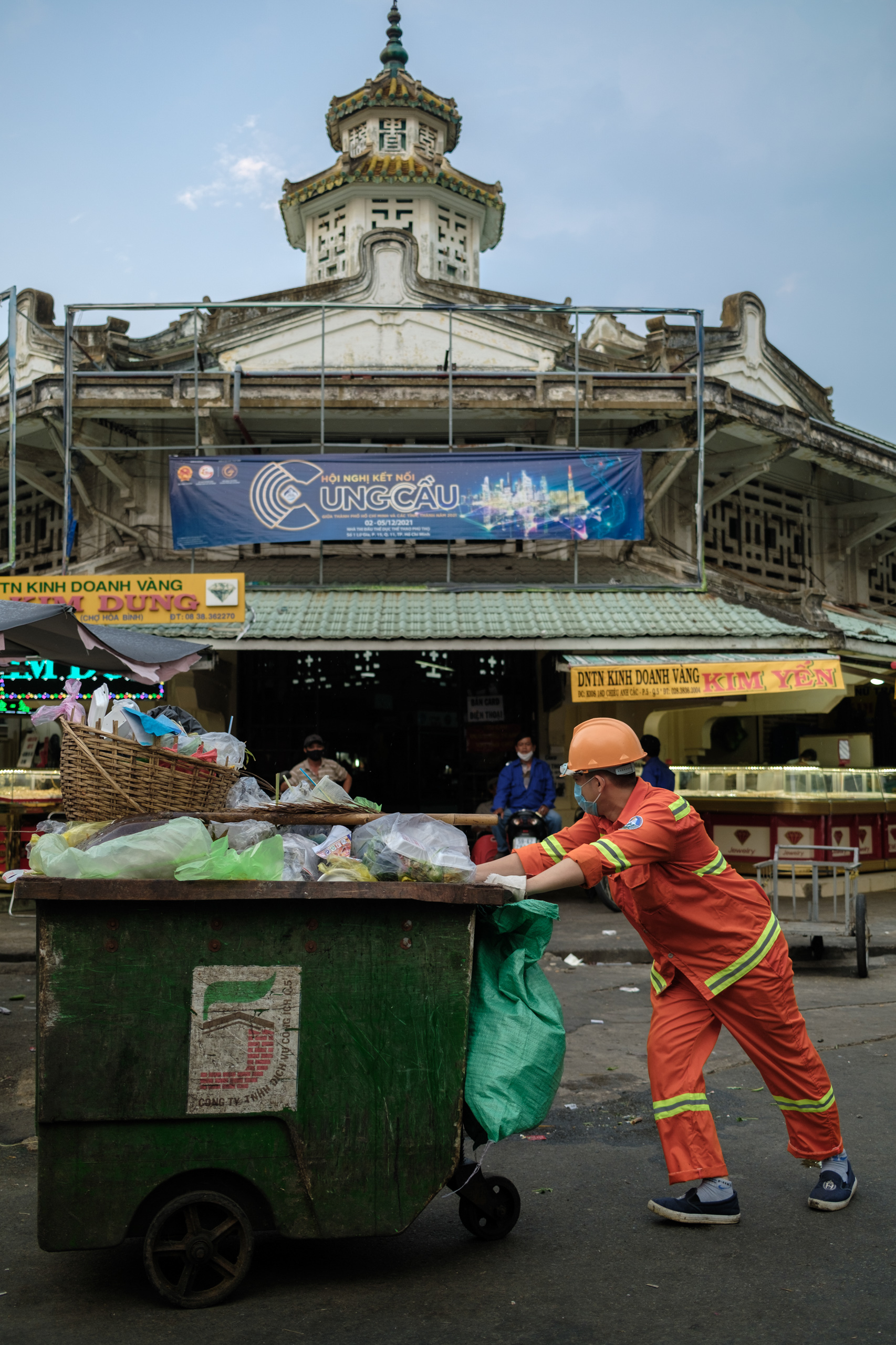 The problem is that nobody knows how they are going to do it. Formal waste collection has traditionally done nothing more than collect trash from homes and businesses and take it to landfills or burn sites. Besides, ve chai, who have been driving recycling in Vietnam, stand to lose.

“With the new law and new regulations, we expect a significant change,” Zellmann said. “It could have a really negative impact on the informal waste sector.”

Plastic bottles collected by see you can currently be sold to waste treatment centers in central Vietnam for 5,000 to 7,000 Vietnamese dong (22 to 31 US cents) per kilogram of plastic.

The plastics are resold by the operators of these centres. There they are often ground up or made into pellets and sold to factories in Vietnam and China, where they are used to make synthetic fabrics and new plastic products.

It is unclear how informal waste workers might be integrated into new recycling programs. But they missed out on government relief programs during the pandemic, and formalizing their jobs could bring them benefits like health insurance. 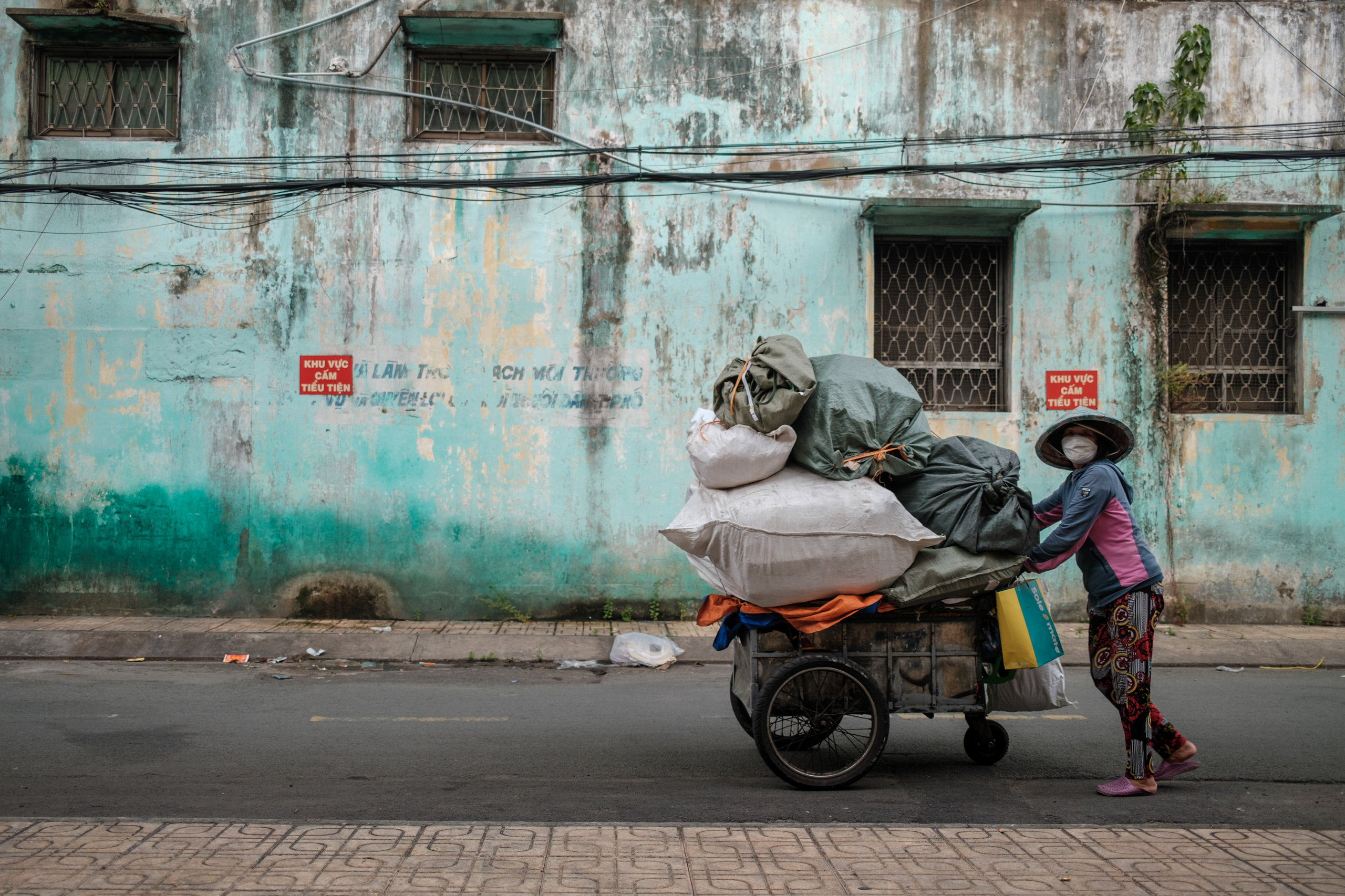 An informal waste picker transports recyclable materials to a processing center in Ho Chi Minh City, where they will sell for between 5,000 and 7,000 Vietnamese dong (US$0.22-0.31) per kilogram (Image: jack ross / China Dialogue)

Changes to the recycling industry in Vietnam are likely to unfold slowly as planning, infrastructure investment and enforcement are required.

“It’s going to be years before municipal waste operators even have the infrastructure or the means of transportation to collect waste separately,” Zellmann said.

“A lot of cities are looking at who is the first to act, who is doing something because they all don’t want to do anything… It’s starting slowly, but it’s the beginning.”