China and its plastic pollution crisis | Earth.Org – Past | Gift

Pervasive and ubiquitous plastic finds its way into almost every part of our daily lives thanks to its convenience and low prices. But as these shocking plastic pollution statistics show, the world as a whole generates at least 350 million tons of plastic waste every year, making it one of the biggest environmental problems of our time. In China, plastic pollution is egregious, attributed in large part to the fact that the country is the largest producer and consumer of plastic in the world. What is the current status of plastic pollution in China and how is the country dealing with it?

The global plastic pollution crisis continues to worsen each year. Today, the world produces nearly 350 million tons of plastic waste, which is expected to double by 2040 if no action is taken. Additionally, approximately 91% of all plastic ever made is not recycled, which means that plastic, which is a material that can take 500 years to decompose, continues to build up and degrade our natural environments.

Eight to 14 million tonnes of plastic waste ends up in the oceans every year, causing serious harm to marine life, from accidental ingestion and entanglement to increased risk of invasive species, which can unbalance entire ecosystems. In the wake of the Covid-19 pandemic, plastic consumption has skyrocketed, adding an additional 25,900 tons of plastic to the ocean, the equivalent of more than 2,000 double-decker buses.

Single-use plastics are also made almost entirely from fossil fuels. If single-use plastic production stays on the current growth trajectory, it could account for 5-10% of global greenhouse gas emissions by 2050, further exacerbating climate change.

Global production of plastic waste by country. Image by: Our world in data

Plastic pollution has long plagued China, along with severe air pollution. Not only does the country consume at least a fifth of the world’s plastics, it is also the largest producer and exporter of single-use and virgin plastics (i.e. new plastics made without any recycled material), and until 2018 the largest plastic importer as well. By way of comparison, Europe produces around 19% of the world’s plastics while North America produces 18%.

In 2020 alone, China produced about 60 million tons of plastic waste, of which only 16 million tons were recycled, according to the China National Resources Recycling Association. On average, only about 17% of the plastic used in China is recycled in one form or another.

As the world’s largest plastics producer, it should come as no surprise that China is also home to around a third of global companies operating single-use plastic production facilities, with one of the biggest culprits being society. oil and gas company Sinopec. The public company was recently named third largest producer of single-use plastic waste in the worldwhere in 2019 it would have produced around 5.3 million tons of plastics. 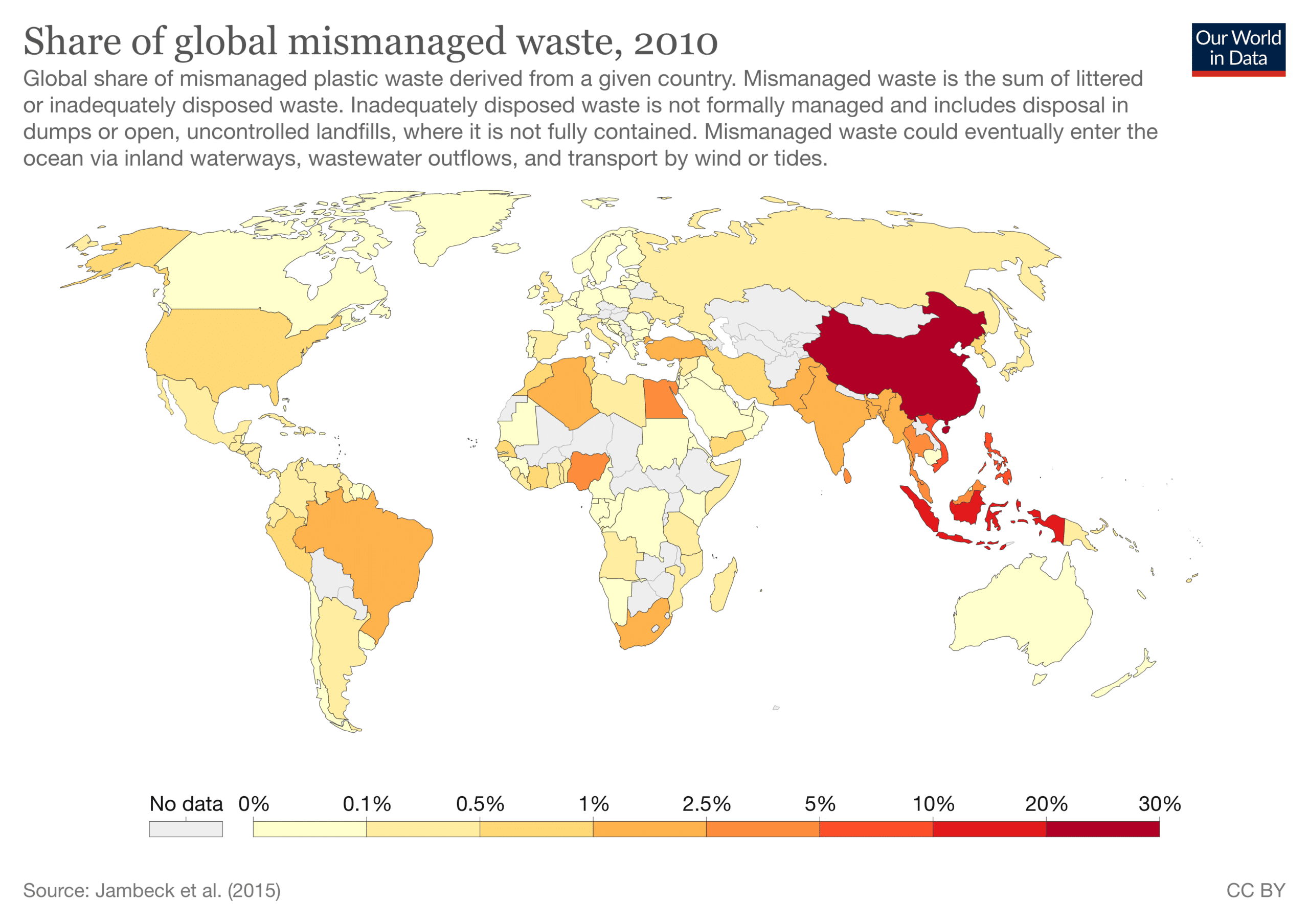 Total overall mismanaged waste. Image by: Our world in data

But China’s contribution to the global plastics crisis does not stop there. China is also by far the the greatest source mismanaged plastic waste and is the biggest culprit of plastic pollution in the oceans.

The Yangtze River, the longest river in Asia and the third longest in the world, is an important body of water in China. Its river basin comprises one-fifth of the country’s land area and supports and shelters nearly one-third of the population. Again reports have linked the Yangtze River as one of the biggest sources of global plastic pollution, claiming that the river is responsible for more than half of all marine plastic pollution, but more recent studies have found that the The Philippines accounts for more than a third plastic inputs into the oceans while placing China at 7%.

Fish forms the majority of the diet of many people in China. Due to plastic pollution in the oceans, where plastics slowly break down into smaller debris and particles called microplastics, a study found that all 21 species of marine fish and freshwater fish from Chinese waters that were examined ingested plastic. This means that people who eat fish have also eaten plastic.

Moreover, China is currently at the top of the list of the biggest emitters of greenhouse gases – although the United States exceeds it in emissions per capita. Its massive local plastic production further contributes to the lion’s share of China’s global greenhouse gas emissions, mostly from coal production.

When combined, China’s plastic pollution situation can look grim, raising fears of monumental and possibly irreversible environmental damage and degradation. This is on top of the fact that China’s population is growing at an average of 0.5% per year. Based on current rates, the country’s total population could reach up to 1.46 billion by 2028, leading to even higher amounts of waste.

But the country is not ignoring its environmental impacts and has taken more aggressive measures to combat this exponentially growing problem.

How is China dealing with plastic pollution

For decades, China has relied on superficial policies targeting plastic to reduce waste in the country. This includes banning free shopping and carrying bags – a Data from the 2016 survey showed that plastic bags in supermarkets and shopping centers have been reduced by more than two-thirds – and a ban on the production, retail and use of any plastic bags of less thickness at 0.025mm.

Despite this, plastic waste continues to soar in part because of the relatively low cost of plastic bags – so shoppers are not deterred from purchasing one – and the rapid rise of e-commerce and delivery servicesleading to the assembly of plastic packaging.

This prompted the Chinese government to put in place a series of new laws and regulations to limit plastic waste in 2020, and announced a plan for 2021 to 2025 that aims to “further improve the management of the entire chain of plastic pollution. “.

The detailed roadmap includes measures to phase out single-use plastics and targets to reduce plastic production, reduce plastic waste going to landfills and boost recycling efforts (with specific targets such as 85 % of agricultural plastic films to be recycled). Waste incineration capacities will be greatly increased, with the objective of reaching up to 800,000 tonnes of urban household waste burned per day by 2025.

Recognizing the rapid growth of its e-commerce industries, the government is urging all retail, e-commerce and express parcel delivery businesses to reduce “unreasonable” use of disposable plastic packaging by 2025, and to have at least 10 million reusable boxes for express delivery. used.

The plan also aims to promote plastic alternatives such as bamboo, wood and paper (and scientific research on biodegradable plastics) over the next five years, as well as to remove plastic waste from major lakes and rivers, tourist attractions and rural areas. Overall, these measures are aligned with the country’s 2060 carbon neutrality goals. 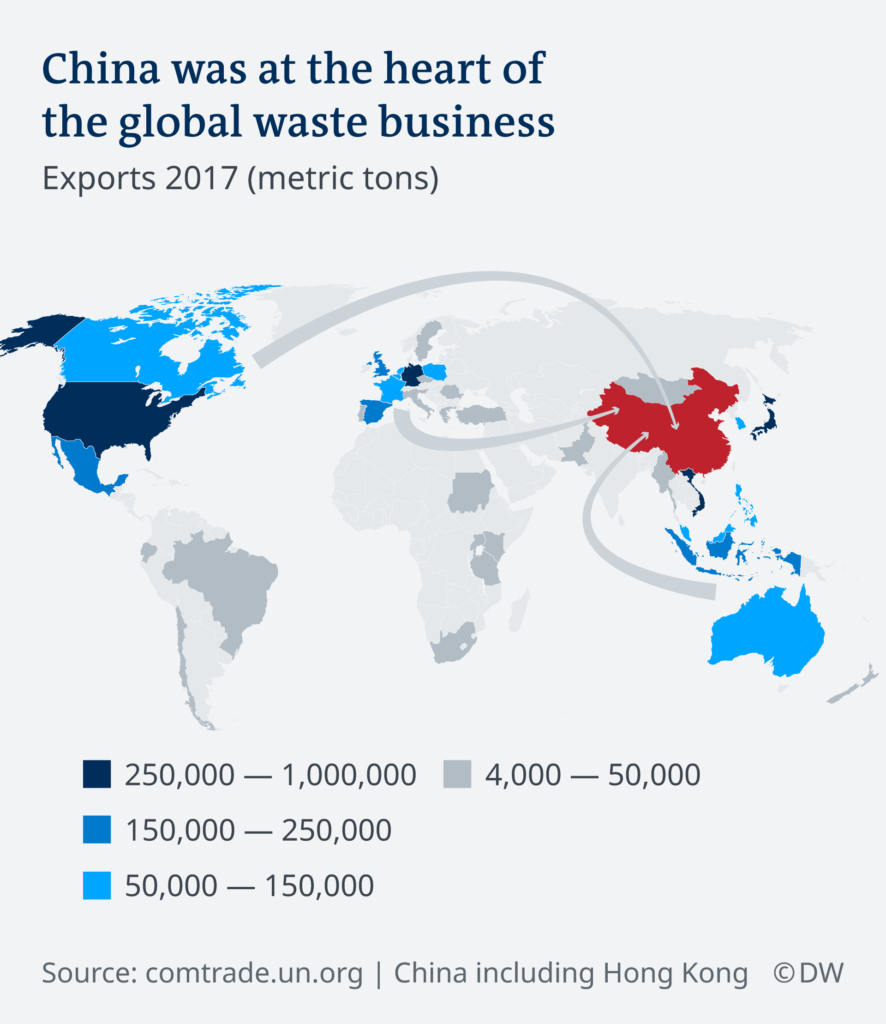 Another monumental step China has taken to tackle plastic pollution is its ban on recycling plastic imports in 2018. As mentioned earlier, China was the largest importer of plastic, absorbing waste from many developed countries, including the United States, Canada, Germany and other countries. Western European nations.

Although more time is needed to analyze the impacts of the ban at the national level, it has had implications for global plastics pollution and management. Although China’s import ban has prompted some developed countries to find ways to reduce and reuse their own plastic waste, much of the Western world’s waste was once destined for China. Many poor quality and contaminated materials are diverted elsewhere, notably to Africa and other Southeast Asian countries such as Vietnam and Malaysia, which arguably had less ability to prevent waste from contaminating their local environment. While the ban potentially helped China reduce its domestic plastic pollution, it did little to reduce global waste and instead shifted the blame to other poorer countries.